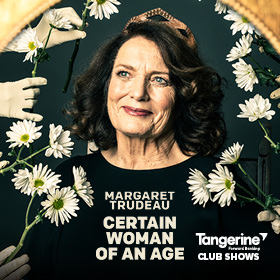 THE JUST FOR LAUGHS FESTIVAL

Mother of Canadian Prime Minister Justin Trudeau, Canadian icon and international mental health advocate Margaret Trudeau, will be bringing her critically-acclaimed, candid conversation Certain Woman of an Age to Just For Laughs this summer. The Second City proudly brings this one-of-a-kind engagement which is currently still in development, produced by Diane Alexander, directed by Kimberly Senior and co-written with Alix Sobler. Ms. Trudeau’s autobiographical one-woman show will feature an intimate conversation that follows her startlingly candid accounts of her wild child days, an isolated life as the prime minister’s wife, the tragic family events, and ultimately embracing a mental illness diagnosis are as surprisingly universal as they are extraordinary. This is an empowering opportunity to be part of living history that audiences of every generation will fall in love–and laugh along with. Margaret Trudeau’s A Certain Woman of An Age will have a 3-night run at JFL this summer!