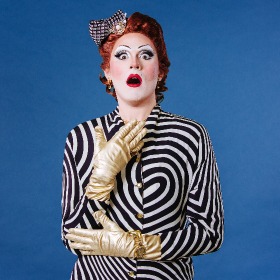 Sweet-as-pie and sharp-as-nails, award-winning drag clown Pearle Harbour is the nation’s premiere tragicomedienne. « One of the most engaging and thoughtful performance artists around » (NOW Magazine), Pearle’s gonzo original works have been presented to rave critical and audience acclaim in sold-out houses cross-country, including some of the most prestigious stages in Canada, featured on CBC-Gem, and published in Canadian Theatre Review. In English.